A Real-Life Lesson in Civics: Only ‘We the People’ Can Save American Democracy 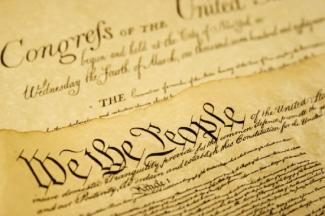 By Randi Weingarten and Leo Casey

The very foundation of American democracy lies in this: that the people choose who will govern them through free and fair elections. Every other important part of American democracy — the rule of law; the freedoms of expression, of conscience and of association; equality under the law; the ability to protest and demand a redress of our grievances; a free press and media; and an independent judiciary — ultimately rest on this bedrock. That is why “we the people” is central to representative democracy. Without the consent of the governed, expressed by voting, democracy is lost.

For many years, we taught this principle in our New York City public high school classes in civics, law, political science and American history. Together with our students, we studied the meaning of the Declaration of the Independence, including its pronouncement that the “just powers” of government are derived from “the consent of the governed.” This much seemed self-evident to our students and to us: that if the vote of the people does not determine who governs, the power of that government over its people cannot be just. A government formed in defiance of the will of the people can no longer be called democratic, nor can it be considered legitimate.

In the first presidential debate, held Tuesday night, we saw President Donald Trump attack this fundamental democratic principle in several dangerous ways. First, he refused to commit to the peaceful transfer of power, and to respect the vote of the American people. As poll after poll shows his re-election campaign floundering, Trump continues to up the ante. His refusal isn’t just a staple of his daily speeches anymore, it’s an all-out move toward authoritarianism, shown in this debate by his repeating of the lie that mail-in voting is fraudulent. But we know Trump votes by mail, and that in the midst of a pandemic, voting by mail is a safe and effective option for those worried about voting in person.

On national TV, the president lashes out with false claims that voting by mail promotes voter fraud. He’s had his campaign mount legal challenges to mail ballots in battleground states. He’s also had his hyper-politicized Department of Justice violate its own rules to spread unfounded reports of voter fraud around the country, all while his appointee as postmaster general has worked to undermine the capacity of the U.S. Postal Service to process and deliver mail ballots. All of this is a coordinated effort to sabotage voting and cast doubt on the validity of the elections.

The president’s assaults on democracy don’t stop there. Since the death of Supreme Court Justice Ruth Bader Ginsburg, Trump has said he needs a ninth justice confirmed quickly because the Supreme Court should be able to overturn the vote and decide the election. He has gone so far as to demand that authorities “get rid of the ballots” that are cast by mail.

Now he’s telling his supporters that they should “watch the ballots,” a charge eerily reminiscent of historic voter suppression against African Americans and remarkably similar to what totalitarian countries do. How often have we been election monitors in other countries to combat this very behavior?

This is a time for truth-telling: These are acts of violence against American democracy.

At this moment, we think back to the classes in which we taught our students about the duties and responsibilities of citizens in a democracy. To keep faith with our students, we — and all educators — must defend American democracy when it is in peril. The words of U.S. Rep. Barbara Jordan, spoken nearly a half-century ago, have a particular resonance today; as educators and as citizens, we share Jordan’s vow: “I am not going to be an idle spectator to the diminution, the subversion, the destruction, of the Constitution.” The phrase “we the people” must not become a dead letter. But the meaning and the power of that phrase depends upon what we, as citizens, do.

The way to stop this attempt to kill democracy is to vote. Every person who can vote must get registered and make a plan to vote by mail, early, or in person. And then, we must fight to make sure every vote is counted. Over the next five weeks, we will do everything in our power to support our fellow citizens in a massive get-out-the-vote effort to do just that. And we hope that will lead to the election of Joe Biden and Kamala Harris.

Let’s be clear: Trump has put the future of American democracy on the ballot. We commit ourselves to ensuring that every citizen is able to cast their ballot, that every vote is counted and that the verdict of the voters is respected — especially by the president, the Congress and the Supreme Court. In the tradition of Martin Luther King Jr. and A. Philip Randolph, we are prepared to organize mass nonviolent direct action to protect this fundamental principle of American democracy: that the people — and not those currently in power — decide who will govern.

Randi Weingarten is president of the American Federation of Teachers. Leo Casey is executive director of the Albert Shanker Institute. For many years, Weingarten and Casey taught civics and social studies in the New York City public schools.