DACA at the White House 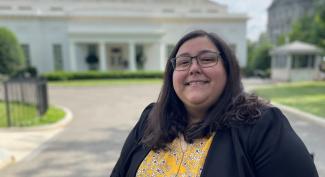 Karen Reyes could hardly believe it. “Aquí estamos en la Casa Blanca,” she says into the phone, holding back tears as she FaceTimes with her mother from the White House lawn. “Here we are at the White House.”

It was moments after she and five other Deferred Action for Childhood Arrivals (DACA) recipients met with President Joe Biden on May 14 to share their experiences as young immigrants in America, and to talk to him about the urgent need for a path to citizenship for millions of people in their community.

Reyes teaches deaf and hard-of-hearing children in kindergarten and first grade in Austin, Texas, and is an active member of Education Austin, the AFT, the National Education Association and immigrant activist organization United We Dream. She moved to the United States when she was 2 years old, one of some 700,000 immigrants who came as children and were later granted DACA, allowing them to work and live in the United States legally. Many AFT members are DACA recipients who work in education, healthcare and public service; many have been working on the frontlines during the pandemic.

"Kids are terrified. I’ve had 4-year-olds scared that ICE was going to come to our school."

Although she has been an unafraid voice for undocumented and “DACAmented” people at rallies, signing petitions and meeting with government officials — and was even a declairant in the successful AFT Supreme Court case to preserve and extend DACA — Reyes was nervous as her Biden visit approached. She worried about what to say, what to wear and whether White House staff might find any offensive tweets from her account — maybe something bad about Biden’s favorite hockey team?

Now she laughs about it, but the anxiety makes sense. She lived in fear when former President Donald Trump canceled DACA — though his attempt was held up in court and never materialized. Even now, Reyes must go before the government every two years to renew her DACA status, and every time she is afraid some detail, some misunderstanding, some unknown circumstance will destroy the life she has built here and separate her from her mother, her job, and the students and colleagues she loves. “It’s a perpetual state of limbo,” she says. “There’s no stability.”

Reyes was able to share this feeling with Biden, who she says lent a sympathetic ear. In fact, the 45-minute meeting went twice as long as scheduled, as each guest told emotional stories about what DACA has meant to them. “The busiest man in the world wanted to meet with us for longer,” says Reyes. “That just shows how important this issue is to him.”

"Even with DACA, life is “a perpetual state of limbo. There’s no stability.”

Biden made immigration reform part of his presidential campaign, and on his first day in office signed a memorandum to preserve DACA. He also proposed an overhaul of immigration laws, including the provision of benefits to DACA recipients and people with Temporary Protected Status — who come from countries where natural disaster or political unrest prompted them to flee to the United States. U.S. Citizenship and Immigration Services is also working on new rulemaking to preserve the DACA program pending the outcome of a case in Texas that may once again threaten the program.

Given this landscape, two bills are especially important in current immigration policy: the American Dream and Promise Act, which gives permanent status to DACA recipients, and the Farm Workforce Modernization Act, which creates a pathway to citizenship within three years to farmworkers who qualify. The House of Representatives has passed both; activists are urging the Senate to follow suit. There is also a movement urging Congress to use the budget reconciliation process, which requires a simple majority, to create a pathway to citizenship for Dreamers, TPS holders and essential workers.

The matter is urgent, says Reyes, who is mindful that as a DACA recipient she is in less danger of deportation, but she belongs to a community of mixed-status people, and her own mother is undocumented. She wants to see a clear pathway to citizenship for all of them.

“No person in this country should have to hide in the shadows. We have to recognize the contribution of our immigrant community.”

“A few years ago, my mom was pulled over by a police officer for a minor traffic stop,” she remembers. “It was the scariest thing in my life, not knowing if she was going to be deported.” She understands intimately when her students are afraid they will go home and their parents will have been whisked out of the country. “Kids are terrified,” she says. “I’ve had 4-year-olds scared that ICE (Immigration and Customs Enforcement) was going to come to our school.”

The AFT has been a big supporter of Reyes, other AFT immigrant members and our immigrant students, pressing for fair treatment for immigrants at every level — from protesting detention of children in cages at the border to sponsoring citizenship workshops, advocating for supportive legislation and suing for justice in the courts. “The point of the union is to help transform the lives of all our members to make sure they have a voice at work and in democracy,” says AFT Executive Vice President Evelyn DeJesus. “No person in this country should have to hide in the shadows. We’re a nation of immigrants, and we have to recognize the contribution of our immigrant community.”

Reyes credits the AFT and NEA for giving her the courage to stand up for herself and her community. “What I’ve learned through my years working with United We Dream and AFT and NEA is that you can’t do everything by yourself, but you can definitely do a lot of things together.” Joining Education Austin, the AFT/NEA affiliate, she says, “I really understood what solidarity meant — knowing that there are so many people who had my back. That’s what made me feel brave.”

So brave, she was able to laugh with the president of the United States. Just as she was saying, “Hello, Mr. President” and preparing for the fist bump she’d been told he likes, he said to her, “Oh, you’re trouble, I can tell.”

She took it as the highest compliment. Echoing the late Rep. John Lewis, she says, “I love to cause good trouble.”