Turbulent Meetings and Targeted Teachers: We Want to Calm the Storm 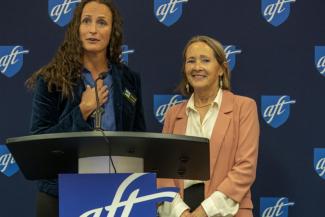 Education politics in Montana had gotten out of hand. At one public meeting, a lawyer for anti-mask parents suggested school superintendents be shot. Riled up about mask mandates, CRT and the inclusion of LGBTQIA+ people in school curricula, people regularly shouted each other down at school board meetings. Many ignored the three-minute time limit, saying, “I’ll talk for as long as I want.” They drew wild conclusions, suggesting that if the teacher’s code of ethics included the word “equity,” students wouldn’t have a chance to enroll in AP classes.

In a state where courtesy and neighborliness had always been the norm, “It was ridiculous,” says Moffie Funk, a former teacher, member of the Montana Federation of Public Employees and founder of Montanans Organized for Education. She blames much of the anger and aggression on out-of-state extremists bent on getting communities “all wound up” over nonexistent threats, groups like the conservative Americans for Prosperity, with its candidate trainings and workshops for Montanans campaigning for school choice — an appealing way to describe privatization with vouchers and for-profit charter schools — and the Montana Family Foundation, known for lobbying against LGBTQIA+-inclusive policies and aggressively pushing school choice.

Funk knows that the majority of parents in Montana love their public schools. They favor equity, they want their children to learn true history, and they don’t want public school funding to be siphoned off into private or for-profit education. So Funk founded MOFE in 2019 to rally pro-public school parents and urge them to step up to the mic themselves, to use their voices and push back against the vitriol and extremism at school board meetings across the state.

“When we talk about what kids need, kids need to see the adults acting like adults and not going to public meetings and throwing slurs around and misinformation,” says Funk. “We need to be the people who support the kids by showing that we’re all in this together.”

Now MOFE has partnered with MFPE to utilize a $75,000 AFT Powerful Partnerships Institute grant to continue that work.

Funk is profoundly grateful for the partnership and the support, and already has plans to make the most of it. “We hope to go into communities that are facing a lot of division within their school boards to support the parents that support public education, because that is by far the majority of Montanans,” she says. “They are getting drowned out by these extremists.” And though many avoid the board meetings because of the caustic environment, she is eager to convince them to speak out.

“We are so grateful to AFT for providing these funds,” agrees Amanda Curtis, president of MFPE and working in partnership with Funk. “We’re really ready to get to work.”

The Passion Behind The Project

When Funk describes her job as an educator, her enthusiasm is contagious. “I taught seventh- and eighth-grade social studies,” she says. “How fun is that?” From 2000 through 2016 she used creativity and innovation to present content her students loved, and she was voted Montana History Teacher of the Year in 2014. Her students crowded into the Capitol rotunda to cheer as she received the award. “They challenge me, they inspire me, they truly are a fabulous age and a fabulous group of kids,” she said at the time.

But in 2016, Funk left the classroom, feeling disheartened. Her efforts to contribute to education policy — by attending school board meetings, questioning administration and trying to explain the importance of equity — were discounted. She had been working to register people to vote, knocking on doors and not hiding the fact that she is a Democrat living in a majority Republican state. She insisted on lifting up the voices of teachers. She was a union advocate.

For all of that, she felt as though she had a target on her back. “There were parents who were after me,” she says. “They were sure that in the 50 minutes a day I had their children, I could indoctrinate them.” The fact is, she was showing her students that the world is not black and white. She was playing devil’s advocate: Even if she shared her students’ views, she would present the other side. She was teaching them to be critical thinkers.

She still tears up remembering. “I would love to have stayed in the classroom a little bit longer, but it just wasn’t worth it anymore. Life’s too short.” Now she sympathizes with those who stayed, and others who also made the wrenching decision to leave. And she focuses on what she can do outside the classroom.

She decided the best she could do was to run for office.

For eight years, Funk has been a delegate in the Montana House of Representatives, focusing on education and labor; her term expires in January. She admits it can be an uphill battle: Montana’s state Legislature has been majority Republican since 2011 and now has a Republican “trifecta” — when the governor, House and Senate are majority Republican. The governor, the attorney general and many of the Republican legislators, back school privatization. Even the superintendent of public instruction seems intent on undermining public education in Montana.

MOFE has helped counter that by amplifying pro-public education voices: Earlier this year, 17 of the 21 candidates it supported won school board seats in six Montana cities. The results, Funk told the Daily Montanan, prove “without a doubt that Montanans trust their teachers, their public school teachers, and school boards to do the best things for their children.”

The next school board elections aren’t until May 2023, but there is much work to be done to raise awareness and urge voters to get involved. What’s at stake? Right now, the Office of Public Instruction is trying to eliminate counselor-to-student and librarian-to-student ratio requirements and diminish arts and music education. Privatization remains a serious threat.

From promoting pro-public school candidates to pushing policies that secure high-quality education, Funk’s organization has worked in partnership with the union. “I could not have gone to the school board meetings every month had the union not had my back,” she says of the days when she was still teaching and representing her local at public meetings. And today? “My organization could not do what it is doing without the support of my union.” The partnership works both ways: Despite the hours she spends advocating through MOFE, Funk is also chair of MFPE’s retired district.

“I will never not be part of my union,” she says.